August activities at the IU Lilly Family School of Philanthropy

We welcomed Claudia Cummings of the Indiana Philanthropy Alliance to the school to discuss multiple points of collaboration. I also had the pleasure of catching up with Rob Johnson, past chair of the IU Alumni Association Board of Managers who is helping us make the most of our trip to India in September. A meeting with BOV member Dr. Carol D’Amico advanced our discussion of a gathering on education and philanthropy in 2020.

In New York, I visited with BOV member Gail Freeman whose perspective on the field and history with the school is always illuminating. Also in New York, I joined about 10 other university-based philanthropy programs at the Ford Foundation, convened by the United Philanthropy Forum and the Sillerman Center of Brandeis University. We discussed how to connect the work in universities to each other and to the world of practice.

The President of IU and the Chancellor of IUPUI hosted informative retreats about the state of our university and campus and the priorities for the new academic year. Our school welcomed Katie Smith Milway to prepare the next phase of our research-to-practice efforts to build on the Stanford Social Innovation Review fall issue cover story by our faculty.

At our orientation for incoming master’s and Ph.D. students, the growing geographic diversity of our students was apparent, including the large number of faces joining remotely via Zoom. I had a good call with Dr. John List and John Glier, who will present a keynote at the SPI Conference we are hosting together with the University of Chicago.

I was pleased to see Dr. George Rapp receive the Sachem Award, Indiana’s highest honor, prior to leaving for India where we will launch a regional report of the Global Philanthropy Environment Index.

WPI’s August highlight was the opportunity to participate in a “Sprint” with Intentional Futures to explore how to turn research into action. Intentional Futures, based in Seattle, is an innovation studio that works with some grantees of the Bill & Melinda Gates Foundation.

Several members of the IF Social Impact team visited Indianapolis for the first round of the Sprint and then two WPI staff traveled to Seattle to help test the prototype product that emerged from the initial sessions. The data point that garnered the most interest among the Intentional Futures team is that talking to children about giving has a greater impact on children’s giving than role modeling alone (Women Give 2013).

The “product” that the IF team developed is Good Talk, a guide to help parents and children talk about generosity, giving, and caring for others. In the next step IF will refine the product based on feedback from the testing phase and, eventually, it may land on the Better Giving Studio website.

8, Osili presented “Trends in Diversity, Equity, and Inclusion” at the CASE Workshop for Inclusion and Collaboration in Advancement (WICA) at the University of Chicago. 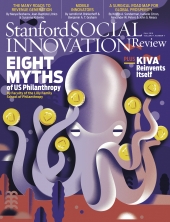 Many of our faculty members collaborated on an outstanding cover article for Stanford Social Innovation Review titled “Eight Myths of US Philanthropy.” Faculty who contributed to the article include: Lehn Benjamin, Pasic, Tyrone Freeman, Patricia Snell Herzog, King, Konrath, Debra Mesch, Osili, Mark Ottoni-Wilhelm, Andrea Pactor, Patrick Rooney, Genevieve Shaker, and Pamala Wiepking. Special thanks are due to Abby Rolland Price and Milway for their assistance.

Christianity Today published a review of King’s newly published book, God’s Internationalists: World Vision and the Age of Evangelical Humanitarianism, and his discussion of how that organization shows how American evangelicals came to understand themselves in a global context in the 20th century.

Forbes published an article by Pactor about the ways in which women are leading through philanthropy, as revealed in WPI’s research reports. She also discussed WPI’s latest report, All In For Women & Girls.

An article by Freeman, “400 years of black giving: From the days of slavery to the 2019 Morehouse graduation,” was published by The Conversation and picked up by TIME, the Atlanta Tribune, the Harrisburg, PA, Patriot News, the Pennsylvania Capital-Star, The Good Men Project, and Raw Story.

Nonprofit Quarterly published an article by Rooney about the decline in the number of medium- and small-gift donors.

Nonprofit Quarterly cited our research on donor-advised funds in an article about whether such funds should be regulated.

Freeman was a featured guest on the African American public affairs weekly program “Bring it On” on WFHB Public Radio in Bloomington, which focused on the Soul of Philanthropy exhibit in Columbus and the importance of Black Philanthropy Month.

Mondaq reported on findings from the Giving USA report about recent trends in the nonprofit landscape, donor advised funds, and looking at the future of giving in 2020 and beyond.

Broadway World – Indianapolis mentioned that Pamala Dyar has taken courses at our school in an article about her new position as executive director of the Indiana Conference for Women.