Faith and Philanthropy: Blueprints for the Common Good?

Join us February 25 as two extraordinary leaders reflect together on the role of faith and philanthropy in meeting the challenges of our common life.

How can faith and philanthropy, in dialogue, help us build a world that knows both love and justice, accountability and reconciliation? How should philanthropic institutions steward their resources for the common good? What are faith communities called to give? What are legacy institutions called to keep?

Listen along and pose questions of your own, as our Distinguished Visitors explore these and other timely issues at the intersection of faith and giving. 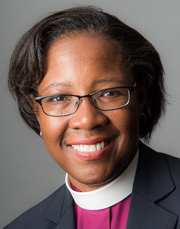 Bishop Jennifer Baskerville-Burrows holds a bachelor’s degree in architecture, which she received with a minor in urban studies from Smith College. In addition she has an M.A. in historic preservation planning from Cornell University and an M.Div. degree from Church Divinity School of the Pacific (CDSP) in 1997.

Before being elected bishop for the Episcopal Diocese of Indianapolis in 2016, she served in the Dioceses of Newark, Central New York and Chicago. She is the first black woman to be elected a diocesan bishop in the Episcopal Church. 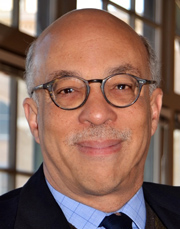 David Dodson is past president and now senior fellow of MDC, a nonprofit organization that works with leaders at all levels to expand opportunity and equity throughout the American South.

As MDC’s president from 1999 until his retirement in 2020, he led place-based work across the South to address stalled economic mobility. He also founded MDC's Passing Gear Philanthropy Institute, where he is currently working with Southern philanthropic partners to expand catalytic philanthropy in the region. Prior to joining MDC, David served as executive director of the Cummins Engine Foundation and director of corporate responsibility for Cummins Engine Company in Columbus, Indiana.

He is a eucharistic minister at his local Episcopal Church and a graduate of Yale University, where he received a B.A. in Architecture and Urban Policy and master’s degrees in Divinity and in Public-Private Management.