Among wealthy households, the average amount given to charity last year increased 28 percent, according to the 2014 U.S. Trust® Study of High Net Worth Philanthropy. Through an ongoing partnership with the Indiana University Lilly Family School of Philanthropy, the fifth in this series of biennial studies reveals a strong commitment to charitable causes among high net worth households. This positive trend is seen in several findings, including: 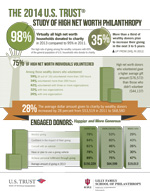 » Download the 2014 Study of High Net Worth Philanthropy Infographic

“This year’s study, more than ever, tells us that when wealthy donors are intentional about and engaged in their giving – when they find that meaningful intersection between their ideas and ideals – they give more, are more impactful and more personally fulfilled," said Claire Costello, national philanthropic practice executive for U.S. Trust.

This research series is the most comprehensive and longest-running of its kind, and an important barometer for wealthy donors’ charitable engagement and viewpoints. The latest study offers valuable insights that help inform the strategies of nonprofit professionals, wealthy donors and charitable advisors alike.

The following are key findings from the 2014 study, which reveal significant shifts as well as consistent trends in the giving behaviors, priorities and strategies of the wealthy, including: the nonprofit subsectors they support, what motivates them to give, why they stop giving, how they give, and family traditions. The study also examines the relationships among wealthy donors’ knowledge of and engagement with giving, how much they give, and the personal fulfillment they enjoy from philanthropy.

Many nonprofit subsectors enjoyed increased contributions from wealthy donors last year. However, findings demonstrate that the education sector was biggest winner, including:

• Eighty-five percent of wealthy donors gave to education in 2013 – making it the charitable subsector supported by the largest percentage of high net worth households. A closer look reveals that 73 percent gave to higher education and 60 percent gave to K-12 education.
• Education also received the largest share of dollars (27 percent) among all charitable subsectors – more than giving to religious, environmental, arts, basic needs and international causes combined.
• The highest percentage of wealthy households directed their largest gifts to religious organizations (34 percent) and educational causes (27 percent) – including higher education (19 percent) and K-12 (8 percent).

Why the wealthy give, and stop giving

A variety of motivations drive high net worth philanthropy. In 2013, wealthy households cited the following as their top motivators for giving:  believing that their gift can make a difference (74 percent), personal satisfaction (73 percent), supporting the same causes annually (66 percent), giving back to the community (63 percent), and serving on a nonprofit organization’s board or volunteering for a nonprofit (62 percent). Only one-third (34 percent) of donors cited tax advantages among their chief motivators for giving.

Wealthy donors have strong feelings about how the nonprofits they support should use their contributions and conduct themselves. For instance, the majority of these donors (81 percent) expect the nonprofits they support to spend an appropriate amount of their donation on general administration and fundraising, and to demonstrate sound business and operational practices (80 percent). They also expect nonprofits to honor their request for privacy and anonymity (78 percent) and, similarly, to not distribute their name to others (74 percent).

When donors stopped giving to a particular charity they previously supported, the top reasons cited were because they received too frequent solicitation or the nonprofit organization asked for an inappropriate amount (42 percent), the donor personally changed philanthropic focus or decided to support other causes (35 percent), the organization was not effective (18 percent) and the nonprofit organization they supported changed leadership or activities (16 percent).

“Nonprofit organizations that understand what savvy donors value and expect, carefully steward their gifts, and demonstrate that they are making a meaningful difference through wise and transparent use of resources can develop enduring partnerships with donors that achieve a shared vision,” said Patrick Rooney, Ph.D., associate dean for academic affairs and research at the Indiana University Lilly School of Philanthropy.

The majority of wealthy donors (73 percent) have a specific strategy in place to guide their charitable giving. This is further evidenced by the fact that 93 percent of donors apply a certain level of focus to their charitable activity, giving to a targeted set of organizations based on geography or a specific cause or issue.

More than half (57 percent) of wealthy donors used a giving vehicle in 2013, or plan to establish one to achieve their charitable goals going forward. Other trends in the use of giving vehicles – such as private foundations, donor-advised funds and charitable trusts – include:

Knowledgeable and engaged donors give more and achieve greater fulfillment

The study found strong relationships between wealthy donors’ knowledge of giving and their characteristics and behaviors, including how they monitor their giving and its impact, consult with advisors, leverage giving vehicles, and achieve personal fulfillment from philanthropic pursuits. For instance:

Family traditions and preparing the next generation

When it comes to decision-making, 61 percent of respondents who are married or are living with a partner reported that they make decisions about their giving jointly with their spouse or partner.

Many wealthy families have giving traditions (41 percent), such as volunteering as a family and giving to charity during the holidays. Among those who volunteer (75 percent), respondents were far more likely to do so with family (68 percent) or friends (68 percent) than they were to do so through a workplace campaign (25 percent) or some other organized group (49 percent).

With regard to the transmittance of philanthropic values, the study found that a family’s personal efforts and those of their friends and peers continue to be the leading sources by which the next generation learn about giving (55 percent), followed by religious organizations (44 percent) and nonprofits (24 percent).

Societal issues and confidence in those working to address them

Consistent with their top giving priority, more than half (56 percent) of wealthy donors also prioritize education among policy issues most important to them – followed by poverty (35 percent), health care (34 percent), and the environment (28 percent).

The study also found that, regardless of government funding of nonprofits, most wealthy donors would remain loyal to the organizations that have already won their support. In fact, in the event government decreased funding for an organization that a wealthy household currently supports, nearly one-third (32 percent) of respondents would increase their charitable contributions.

When it comes to resolving domestic and global issues, wealthy donors express the most confidence in nonprofit organizations (92 percent) and individuals (91 percent). Fewer – and in many cases far fewer – have faith in the federal government (54 percent), state or local government (61 percent), Congress (25 percent), large corporations (58 percent) and religious institutions’ (73 percent) ability to do so.

The purpose of the 2014 U.S. Trust Study of High Net Worth Philanthropy is to provide comprehensive information on the charitable giving and volunteering activities of high net worth households. Conducted between April 2014 and September 2014, the study consisted of mail and web surveys randomly distributed to 20,000 households in high net worth areas of the United States. The fifth in this series of studies builds on those completed in 2006, 2008, 2010 and 2012 and was once again written and researched in partnership with the Indiana University Lilly Family School of Philanthropy. Results are based on a nationwide sample of 632 U.S. households with a net worth of $1 million or more (excluding the value of their home) and/or an annual household income of $200,000 or more.

U.S. Trust’s Philanthropic Solutions Group serves the philanthropic needs of individuals and families as well as nonprofit institutions across the investment businesses with Bank of America. Philanthropic Solutions distributes more than $300 million in grants to charitable organizations annually on behalf of clients where U.S. Trust serves as trustee, co-trustee or grant-making agent. The investment businesses within Bank of America, including U.S. Trust, Merrill Lynch Wealth Management and the Merrill Lynch Private Banking and Investment Group are among the nation's leading providers of investment and philanthropic services to individuals, families, foundations, endowments and other nonprofit organizations.

The Indiana University Lilly Family School of Philanthropy is dedicated to improving philanthropy to improve the world by training and empowering students and professionals to be innovators and leaders who create positive and lasting change. The school offers a comprehensive approach to philanthropy through its academic, research and international programs and through The Fund Raising School, Lake Institute on Faith & Giving, and the Women’s Philanthropy Institute.

Bank of America is one of the world's largest financial institutions, serving individual consumers, small businesses, middle-market businesses and large corporations with a full range of banking, investing, asset management and other financial and risk management products and services. The company provides unmatched convenience in the United States, serving approximately 48 million consumer and small business relationships with approximately 4,900 retail banking offices and approximately 15,700 ATMs and award-winning online banking with 31 million active users and more than 16 million mobile users. Bank of America is among the world's leading wealth management companies and is a global leader in corporate and investment banking and trading across a broad range of asset classes, serving corporations, governments, institutions and individuals around the world. Bank of America offers industry-leading support to approximately 3 million small business owners through a suite of innovative, easy-to-use online products and services. The company serves clients through operations in more than 40 countries. Bank of America Corporation stock (NYSE: BAC) is listed on the New York Stock Exchange.

Are Not FDIC Insured Are Not Bank Guaranteed May Lose Value

Bank of America, N.A. makes available investment products sponsored, managed, distributed or provided by companies that are affiliates of BofA Corp. or in which BofA Corp. has a substantial economic interest, including BofA® Global Capital Management.