Age of Attendees, Clergy Attention to Giving are Key Factors in Many Congregations' Financial Health 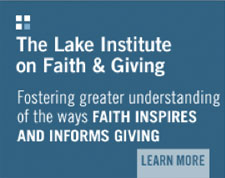 Congregations whose clergy are aware of giving trends in their congregation and those with younger attendees were more likely to see positive fundraising results between the first half of 2011 and the first half of 2012, according to a new report from the Lake Institute on Faith & Giving at the Indiana University Lilly Family School of Philanthropy.

The 2013 Congregational Economic Impact Study (CEIS) analyzes how certain types of congregations are coping with recent economic challenges and explores their financial and fundraising practices, as well as how they are addressing gradual, long-term changes affecting the landscape of American religious life.

The study was conducted in partnership with the Alban Institute, the National Association of Church Business Administration, the Indianapolis Center for Congregations and MAXIMUM Generosity. Of the more than 3,100 U.S. congregations responding to the survey, approximately two-thirds are Mainline Protestant, a quarter are Evangelical Protestant and the remaining respondents represent other Christian denominations (such as historically Black or Catholic), Jewish, or “other” (such as unaffiliated) congregations. More than 60 percent of respondents are clergy members.

Although clergy awareness and involvement are key to a congregation’s fundraising success, 49 percent of responding congregations reported that their clergy are not aware of how much is donated to the congregation and who gives, compared with 45 percent who said their clergy is knowledgeable about these trends.

“While many clergy are reluctant to delve into information related to individual giving, it is via their giving that many donors turn their beliefs into a way of living,” said William G. Enright, Ph.D., the Karen Lake Buttrey Director of the Lake Institute on Faith & Giving. “As such, donors do not see this form of pastoral care as offensive or intrusive. This study demonstrates how important it is that clergy are knowledgeable about the congregation’s giving and that they are willing to talk about financial matters with members and attendees.”

“Congregations are remarkably resilient,” said Una Osili, Ph.D., Director of Research for the School of Philanthropy. “There are still many in need, but it appears that the majority of the congregations we surveyed are recovering from the worst of the Great Recession.”

Still, while nearly three-fourths of responding congregations (74 percent) reported that they felt they had fared well or very well financially in weathering the recent recession, only about four in 10 congregations had actual revenues that kept pace with or were ahead of inflation between 2007 and 2011.

“Although the survey doesn’t tell us how congregations fared against inflation in 2012, the specter of congregational revenues failing to keep pace with inflation has fiscal consequences: money matters,” Enright said. “When the buying power of the dollar is diminished, programs are cut, services are eliminated, and in time congregations’ doors may be shuttered.”

Responding congregations displayed distinctive characteristics regarding personal finance and charitable giving issues. The following key findings illustrate trends among respondents that may have implications for the future of many American religious congregations.

The 2013 Congregational Economic Impact Study is the second in a series. Released in 2009, the first wave, which was a partnership between Lake Institute on Faith & Giving and the Alban Institute, examined the impact of the recession on some types of U.S. congregations and how they responded to it.

The CEIS is a constituency survey, meaning that the responses provided by survey participants represent those of the average congregation affiliated with the partner organizations. In the 2009 study, which assessed congregational finances in the period 2007–2008, responses were highly representative of Mainline Protestant congregations due to the Alban Institute’s sole presence as a partnering organization.

About the School of Philanthropy

The Indiana University Lilly Family School of Philanthropy is dedicated to improving philanthropy to improve the world by educating and empowering students and professionals to be innovators and leaders who create positive and lasting change. Located at Indiana University-Purdue University Indianapolis, the School offers a comprehensive approach to philanthropy through its academic, research and international programs and through The Fund Raising School, the Lake Institute on Faith & Giving and the Women’s Philanthropy Institute.

Lake Institute on Faith & Giving exists to serve the public good by exploring the multiple connections between philanthropy and faith within the major religious traditions. Its mission is to foster greater understanding of the ways in which faith inspires and informs giving. To date, over 2,000 congregations have been impacted by initiatives to create congregational cultures of generosity. Lake Institute is a program of the Indiana University Lilly Family School of Philanthropy. For more information, visit http://www.philanthropy.iupui.edu/the-lake-institute.