Pockets of poverty may be underestimated by government data

According to a new analysis released today by the Human Needs Index (HNI), states with greater remoteness have higher levels of need than government measures suggest.

The HNI, a joint project between The Salvation Army and the Indiana University Lilly Family School of Philanthropy, tracks changing levels of need across geographies and over time. It is based on The Salvation Army’s basic assistance including meals, groceries, clothing, and furniture – as well as help paying for housing (mortgage/rent assistance), medical/prescription expenses and energy bills. The HNI is the first multidimensional measure of human need based on objective data from a nonprofit on the front lines of providing social services. It serves as a powerful tool to track need with different indicators and less lag time than conventional government data. 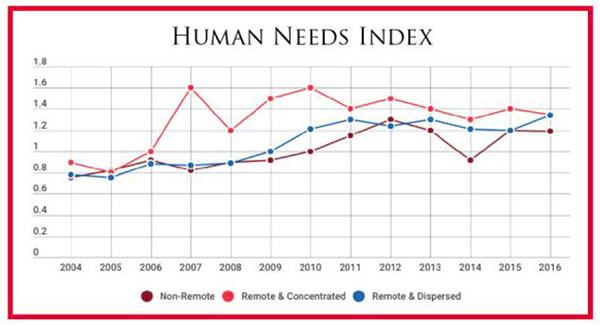 Using a three-level classification system developed by the researchers, HNI values were tested against the U.S. Census Bureau’s poverty data, SNAP usage data and unemployment data. Researchers concluded that in remote states, levels of need as reflected in the HNI were higher than government services usage data would suggest.

“The Human Needs Index helps us understand that the needs and the challenges facing those in poverty in rural America may be quite complex—and how we address them may differ—from the needs of those living in poverty in urban areas,” said Una Osili, Ph.D., associate dean for research and international programs at the Lilly Family School of Philanthropy.

“By combining The Salvation Army’s extensive, reliable data and the expertise of our research team, the Human Needs Index gives us the ability to discover how patterns of need are evolving and where need is elevated in ways that had not been readily apparent,” said Amir Pasic, Ph.D., the Eugene R. Tempel Dean of the school.

One potential explanation for remote states showing higher levels of need than those indicated by government measures is that households in remote areas may face challenges in accessing government services. If need in these states is not being identified or met by government services, it would be expected that these states would have higher HNI values, since the Salvation Army provides services to households located in remote areas.

The Salvation Army has a unique program to serve rural populations experiencing poverty-related need. Its Service Extension program, active through 182 locations across the country, offers assistance to people experiencing unforeseen crises ranging from an emergency need for food or transportation to temporary shelter – services often provided by volunteers in nearby communities.

“Often these clients have difficulty accessing government services or are disproportionately affected by cuts in those programs,” said Lt. Col. Ron Busroe, National Community Relations and Development Secretary for The Salvation Army. “The fact that this analysis of the Human Needs Index reveals higher need in remote areas is something our Service Extension staff and volunteers have known for some time.”

Another possible reason why remote states might have higher need levels than government data might suggest is that some people in the workforce may be underemployed or may have stopped looking for a job. In addition, preferences and strategies for coping with vulnerability may differ across remote and non-remote locations. There is also some indication that some people living in remote areas may prefer to rely, or be accustomed to relying, on other types of organizations to provide services (such as social service nonprofits or congregations) rather than relying on government to meet their needs.

Analyzing urban and rural human need at the state level is complex because most states have a combination of both urban and rural areas within their borders. To capture intra-state distinctions researchers used two distinct measures in the analysis. One is metropolitan population percentage (“population concentration”), defined by the U.S. Census Bureau as the percent of the state’s population living in cities of 50,000 or more people. Second is landmass remoteness (“remoteness”), defined by the U.S. Department of Agriculture as the percent of the state’s landmass that is essentially an hour’s drive or more from a city of 50,000 or more people. Used together, these provide an in-depth measurement of rurality.

About The Salvation Army

The Salvation Army, established in London in 1865, has been supporting those in need in His name without discrimination for more than 130 years in the United States. Approximately 30 million Americans receive assistance from The Salvation Army each year through a range of social services: food for the hungry, relief for disaster victims, assistance for the disabled, outreach to the elderly and ill, clothing and shelter to the homeless, and opportunities for underprivileged children. 82 cents of every dollar donated to The Salvation Army is used to support those services in 5,000 communities nationwide. The Salvation Army tracks the level of need across the country with the Human Needs Index. For more information, go to salvationarmyusa.org or follow on Twitter @SalvationArmyUS.

About the Indiana University Lilly Family School of Philanthropy

The Lilly Family School of Philanthropy at IUPUI is dedicated to improving philanthropy to improve the world by training and empowering students and professionals to be innovators and leaders who create positive and lasting change. The school offers a comprehensive approach to philanthropy through its academic, research and international programs and through The Fund Raising School, the Lake Institute on Faith & Giving and the Women’s Philanthropy Institute. Follow us on Twitter @IUPhilanthropy and “Like” us on Facebook.