Parents' charitable giving is affected by the sex of their first child, a new report released today by the Women's Philanthropy Institute (WPI) at the Indiana University Lilly Family School of Philanthropy reveals.

"The sex of the first-born child affects the likelihood that the parents will give to charity, the amount they give, and the types of causes and organizations they support," said Debra Mesch, Ph.D., the Eileen Lamb O'Gara Chair in Women's Philanthropy, director of WPI, and co-principle investigator for the study. "This is an important factor influencing charitable giving that was previously unknown."

Among other key findings of the Women Give 2015 study are: 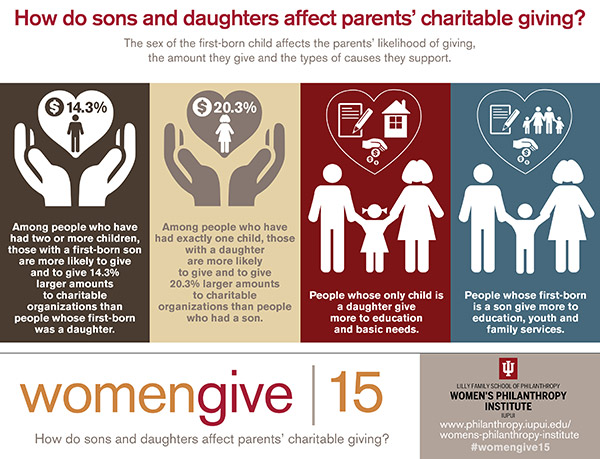 "Research in several fields has examined how the sex of a child affects parents' behavior, but this is the first study to ask this question about philanthropy," said Mark Otttoni-Wilhelm, Ph.D., the co-principal investigator and Professor of Economics and Philanthropic Studies at Indiana University-Purdue University Indianapolis (IUPUI). "Finding that the sex of the child does have an impact on the parents' philanthropy is one of those special moments of discovery."

Many previous studies have found that parents influence their children’s generosity. The new research expands that sphere of influence to include children’s effect on their parents’ generosity. The researchers found that the children’s effect was shaped by other family characteristics, including the number of children, the partnership status of the parents (partnered or not), the parents’ partnership history and whether any children are still living at home.

"Today, there is more knowledge than ever about the effect gender has on philanthropy. Even so, research has barely begun to scratch the surface," said Amir Pasic, the Eugene R. Tempel Dean of the school. "The Women Give series uncovers key insights, including this latest revelation, that are helping to advance understanding of the complex role gender plays in influencing how and why women and men give."

Women Give 2015: Read the full report

Read all Women Give reports


About the Women’s Philanthropy Institute

The Women's Philanthropy Institute increases understanding of women's philanthropy through rigorous research and education, interpreting and sharing these insights broadly to improve philanthropy. By addressing significant and groundbreaking research questions and translating that research into increased understanding and improvements in practice, WPI helps to leverage new and expanded resources for the common good. Follow us on Twitter @WPIinsights and "Like" us on Facebook .

About the Lilly Family School of Philanthropy

The Indiana University Lilly Family School of Philanthropy is dedicated to improving philanthropy to improve the world by training and empowering students and professionals to be innovators and leaders who create positive and lasting change. The School offers a comprehensive approach to philanthropy through its academic, research and international programs and through The Fund Raising School, Lake Institute on Faith & Giving and the Women’s Philanthropy Institute. Follow us on Twitter @IUPhilanthropy and "Like" us on Facebook.