Tax policy changes proposed by Congress and the Administration would reduce charitable giving by up to $13.1 billion, new research conducted by the Indiana University Lilly Family School of Philanthropy indicates.

The study used the 2014 Tax Reform Act introduced by then House Ways and Means Committee Chairman Dave Camp (R-MI) to estimate the potential effects of tax policies on charitable giving. The tax proposal released by the Administration last month and the Republican legislators’ proposal both closely mirror the Camp proposal with respect to reducing the top marginal tax rate and increasing the standard deduction.

The study was commissioned by Independent Sector, a national membership organization of nonprofits, foundations and corporations, with funding from Leadership 18, an organization comprising national human service nonprofits.

Among the study’s key findings:

"When talking about changes in tax policy, it is important that the debate is informed by research. This study provides important information about the expected effects of the proposed tax policy changes and the extension of the charitable deduction to non-itemizers,” said Patrick M. Rooney, associate dean for academic affairs and research at the Indiana University Lilly Family School of Philanthropy.

Much of the research on this topic relies on tax data from itemizing households only, but by using data from the school’s Philanthropy Panel Study (PPS) and the University of Michigan’s Panel Study of Income Dynamics, the new study includes giving by both itemizing and non-itemizing households and can isolate the giving behaviors of each. PPS allows the study to track behaviors of the same 9,000 households over time and provides more information about the households studied. It uses a much larger and nationally representative cross-section of lower- and middle-class households—the households who would be the most affected by extending the charitable deduction to non-itemizers.

By combining the researchers’ approach to calculating the effect of a change in tax price among different income brackets with PPS data about household giving by non-itemizers, the study is able to estimate the different effects that the proposed policies would have on different income brackets. The use of PPS data also allows researchers to estimate the relative effects that adding a non-itemizer deduction would have on giving to religious congregations as compared to giving to other charities. 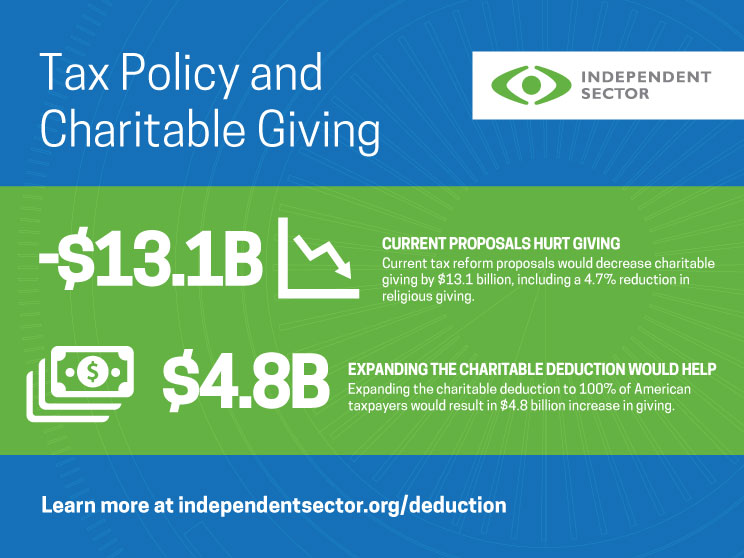