Nonprofits seeking new and generous donors should look to a seemingly unlikely source: young, single women who are not religious, a new study by the Women’s Philanthropy Institute at the Indiana University Lilly Family School of Philanthropy finds.

Conventional wisdom says younger generations—Millennials and Gen Xers—are less generous than their predecessors. And previous research has found that people who are affiliated with a particular religion and who attend services regularly are more likely to give, and to give more, to both religious and non-religious charities than people who do not have a religious affiliation.

The Women Give 2014 report confirms this positive relationship between religiosity and giving for most populations studied, but in an important shift from the standard religiosity-giving story, the study finds key exceptions that counter the conventional wisdom about both age and religiosity. Those exceptions have significant implications for how both religiously identified and non-religiously identified nonprofit organizations appeal to current and potential donors.

Specifically, the study finds that young, single women without a religious affiliation: 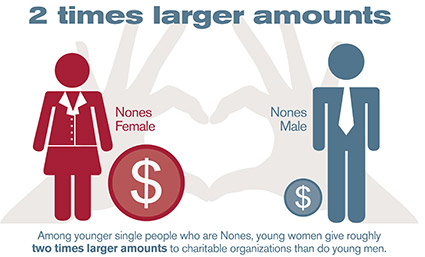 “Gender and age clearly matter and have a substantial influence on giving choices,” said Debra J. Mesch, Ph.D. director of the Women’s Philanthropy Institute. “This study shows that different patterns in charitable giving exist between young men and young women. Nonprofit leaders and fundraisers may need to develop new strategies to engage them more effectively.”

The study is the first to examine in a single analysis the combined effects of religiosity, gender, and age on charitable giving. Prior studies have looked at connections between two of the factors but not all three. Women Give 2014 uses a multi-layered analysis to gain deeper understanding of how gender and age affect the traditional religiosity-giving relationship. The study of 762 donors (primarily Protestants and Roman Catholics) looks at their giving to organizations that have a religious identity (e.g., World Vision, Compassion International or Catholic Charities) and to organizations that do the same kind of work but which do not have a religious identity (e.g., CARE, Save the Children or United Way). Giving to congregations is excluded to allow a clearer picture of how the factors examined affect giving to other types of nonprofits.

“Many in the nonprofit sector have expressed concern that recent declines in Americans’ religious affiliation and attendance might foreshadow a decline in charitable giving to both religiously and non-religiously identified nonprofits. This study demonstrates that donors’ religiosity is not a one-size-fits-all predictor of whether, how much and for what they give,” said Mark Ottoni-Wilhelm, lead researcher for the study and visiting endowed chair holder of the Eileen Lamb O'Gara Chair in Women's Philanthropy at the school. “These results underscore that nonprofits should pay attention to the religious and non-religious orientations of their donors and develop tailored strategies to connect with those who share an interest in the charitable purpose they serve.”

The full Women Give 2014 report, as well as previous reports in the series, are available here.

About the Indiana University Lilly Family School of Philanthropy
The Indiana University Lilly Family School of Philanthropy is dedicated to improving philanthropy to improve the world by training and empowering students and professionals to be innovators and leaders who create positive and lasting change. The school offers a comprehensive approach to philanthropy through its academic, research and international programs and through The Fund Raising School, Lake Institute on Faith & Giving and the Women’s Philanthropy Institute. Follow us on Twitter or “Like” us on Facebook.